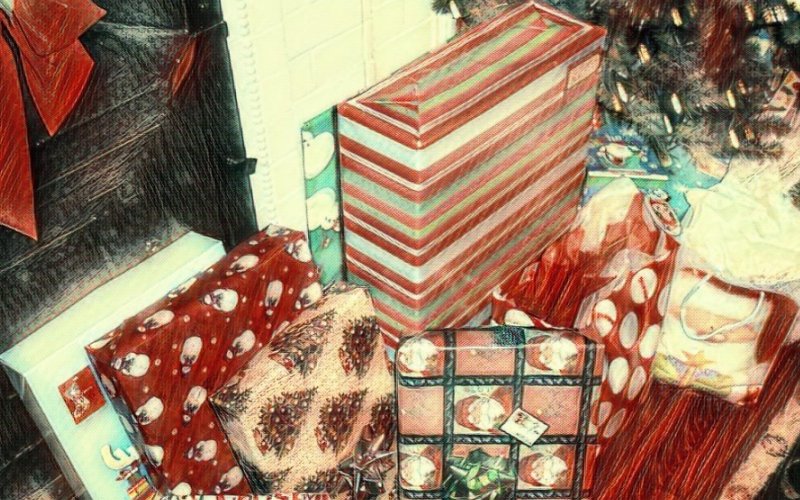 "The sleigh is all loaded and ready to go,
The reindeer are playfully pawing the snow,

A sky full of stars will serve as his guide,
And man's best friend will sit by his side,

For years you will hear about that wonderful night,
So here is the story of that Christmas Eve flight,

Many gifts were wrapped and ready to go,
The sleigh was so heavy as it slid thru the snow,

As it lifted and rose toward the star studded sky,
The jolly old driver gave thanks it would fly,

One star shone brighter than all of the rest,
To guide one from the North and some from the west,

Strong winds were blowing and the reindeer grew weary,
And though forced to land the old gent was still cheery,

As he jumped from the sleigh he heard such a sigh,
There was nothing in sight but it sounded nearby,

As he looked more closely he saw the poor soul,
In the snow two eyes and a nose black as coal,

The furry white puppy was half frozen or dead,
With bones that were showing from not being fed,

There are children who love him that are willing to share,
Tonight he will live because of children who care,

A red blanket he fetched and fashioned a bed,
From gifts for the children made he a collar of red,

Twelve birthstones were placed on the collar in gold,
And soon the limp puppy would be safe from the cold,

A stone for each month so the old gent would know,
Every child that is born for their birthstone would glow,

A name he knew well must be inscribed on a tag,
The old gent went quickly and searched through his bag,

The tag was all finished and the collar in place,
The glow from the stones lit the puppy's small face,

More brightly they glowed with such brilliant warm tones,
Bringing a quiver of life to his half frozen bones,

Now next to his new master and safe in his bed,
The reindeer leaped skyward for he still must be fed,

The children would leave goodies for the old gent to eat,
So at his next stop there will be a nice treat,

Everyone is asleep so they quickly go in,
The food would be found by the tree in the den,

There's food on the table and next to the door,
A dish full of food has been placed on the floor,

A note can be read by the light from the stones,
From children who love you Merry Christmas Woofie Bones,

So if you should awaken some Christmas Eve night,
And from another room see a flicker of light,

If it's a splatter of color with warm rich tones,
You can be sure it's old Santa and Woofie Bones."